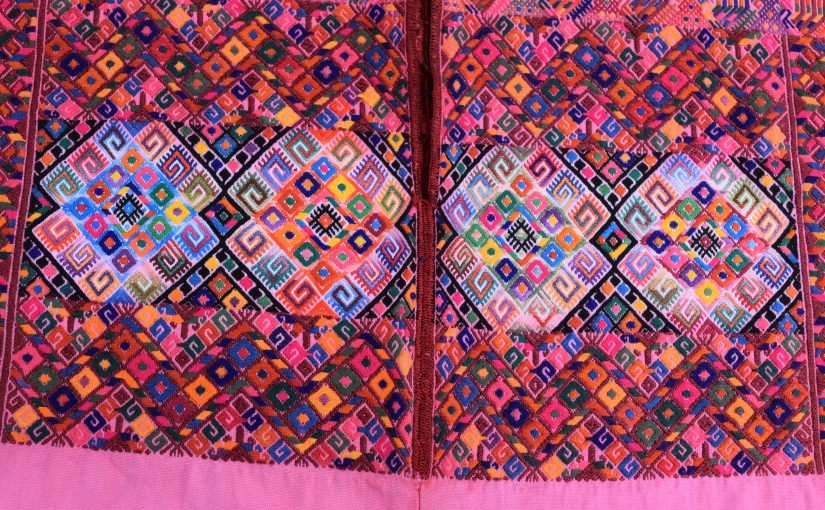 The perfect is used in a variety of ways in K’iche’. It mainly denotes that an action was begun in the past, but it also has other uses, which we will study in this unit.

Our ajtij Xwan tells a story: pay attention to the uses of the perfect in it, and review after studying the grammatical explanation in the Kem chi’ section.

A verb in this aspect indicates that the action was begun in the past; the action or its effects continue up into the present.  Intransitive and transitive verb stems may be presented in the perfect using different suffixes.

This aspect is only marked by a suffix and carries no prefixed aspect marker.  Pronoun use is exactly as in a finite verb from, i.e. transitive constructions take Set A (ergative) and Set B (absolutive) pronouns in the same order as in finite verbs; intransitive perfects are marked by Set B pronouns only.

For intransitive verb roots, passive II, and antipassive stems the perfect is formed with the suffix –(i)naq.  Perfect from positionals are formed with –(i)naq from the adjective/stative stem ending in –Vl/Vn. The subject is marked with absolutive agreement:

Transitive verb stems (CVC and non-CVC):
In active and passive I voice (passive II see above), the perfect suffix is –om; when root vowel is –u- the suffix is –um. In word final position the vowel of the perfect suffix lengthens (usually not represented in writing). Roots that end in a glottal stop, only add –m.

PASSIVE VOICE: for the perfect passive the root does not lengthen.  These forms are distinguished from their active counterparts by the use of Set B pronouns only.

Pay close attention to the person marker closest to the verb: if ergative, it is the agent of a transitive construction; if absolutive, the verb form is intransitive, and the pronoun indicates the subject.

USE OF THE PERFECT ASPECT

Perfect aspect expresses the idea of an action that began in past time and continued into the present. This form can be translated into English as an –ing form.

Verbal adjective
The verb in the perfect aspect is used as an adjective:

The perfect aspect is translated as the pluperfect (had) when it is used with chik. Often it appears in  a sentence accompanied by a second verb phrase whose verb is in the completed aspect.

The perfect aspect is translated as the future perfect (will have) when it is used with chik and in a sentence accompanied by a second verb phrase whose verb is in the incomplete aspect.

Note: the verb eta’maj
Not only is the perfect stem a little irregular (eta’m), in the perfect aspect the meaning of eta’maj “learn” changes to “know”

Translate the following phrases to English:

Translate the following phrases to K’iche’: