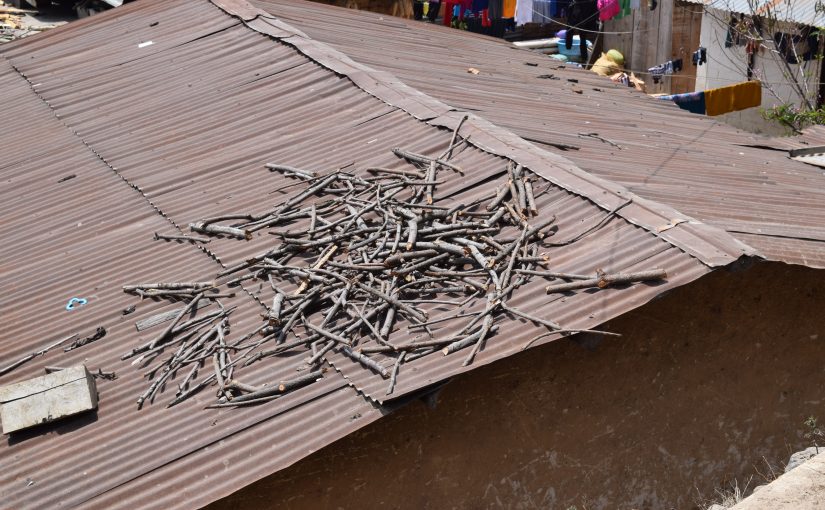 In this unit, we will study directionals, particles that denote from/to where actions take place. They appear after verbs to signal direction.

“The workers” are the subject in this phrase, however, the directional kan reveals that the action is talked about from a perspective removed from the place of the action.

Some directionals change forms according to phonological environment; directionals have phrase-medial and phrase-final forms, and sometimes merge with other particles. Sometimes they give a specific meaning to a verb; for example:

la/ (u)loq
This form is used when action occurs towards the speaker’s spatial location. When (u)loq is not utterance final, it takes the form la. Uloq loses its first vowel when the preceding word ends in a vowel or vowel-like sound.

Le achi xka’y loq.
The man looked in this direction (towards the speaker).

Note that what distinguishes ‘take’ from ‘bring’ in K’iche’, is the directional accompanying the verb –k’am:+ b’ik  “take away (there)”  and k’am+uloq “bring here”

(u)loq combines with other adverbs or pronouns, changing sometimes its phonological shape:

Na nuk’amom tu’la ri’.
I have not brought that here.

B’i(k)
This form is used with actions involving movement away from the speaker’s spatial location or deictic origo. When not in clause-final position, b’ik takes the form b’i.

Le ali xel b’ik.
The girl went out (away from here).

Le achijab’ xe’q’ab’aroq.
The men went away and got drunk.

Le ali xel b’i pa ja.
The girl went out away from the house (the speaker is in the house).

B’i(k) combines with other adverbs or pronouns, changing  sometimes its phonological shape:

La kamik kak’am lu’b’ik?
Will you (formal) take it away today?

Na kaqak’am tu’b’i kamik.
We’re not taking it away today.

Kan(oq)
This form is used to indicate that the speaker/subject has moved away from the event location. Kanoq is found in phrase-final position and kan elsewhere.

Xinya kan le nuchim pa k’ayb’al.
I left my bag in the market.

Le qatat xub’ij kanoq chi kape chi na.
Our father said before he left that he would come again later.

Apan(oq)
This form is used with actions involving movement between the speaker and a point in space located nearby. Alternatively, it may indicate that the narrative’s deictic origo is not the sentence subject’s position, but the speaker’s.

Q’an(oq)
This directional denotes movement upward. It can also refer to days into the future.

33. Xinxuli’ qaj pa le ja. / Xinxuli’ qajoq.
I went down in/to the house (down stairs within the house, down from one house to another). I went down.

Ka/Koq
This directional indicates that the event is happening towards an “inside”.

Kimb’e na ka pa le wo’ch.
I am just stepping inside my house (for a moment)

Kinka’y ka pa le wo’ch.
I am peeking into the house (the understanding is that the head is stuck through the doorway/window ; movement of head is vertical on eye level)
K’AK’A TAQ TZIJVocabulary
CHAK KECH TIJOXELAB’Exercises

Translate the following phrases into English

Translate the following phrases to K’iche’: