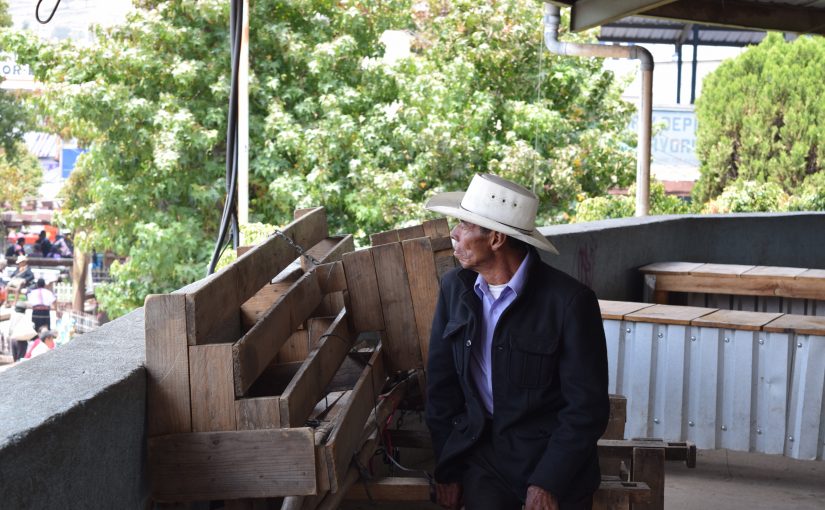 In K’iche’ location and existence are referenced with the existential particle (k’o) and other words derived from it. Its range of meanings include “to have”, “to exist” and “to be.”

One day, my grandfather got sick. His stomach hurt. My siblings quickly had a meeting. They were there and I was there, too. We discussed what we were going to do in order to cure him. We decided that it was necessary that some of us went to the doctor (curandero). It was also necessary that someone stay with my grandfather. We split up, my aunt would go to her house. My wife came and said to her “Stay a bit, aunt, have something to eat here.” “Alright,” said my aunt. My older brother stayed with my grandfather, we went, with my younger brother and my uncles to the doctor. When we got to his house, my younger brother said “Are you home, sir?”  “I am. Have you been here?” said the doctor. “We haven’t, we came to you; we want we want you to come look at our grandfather because he is very sick (is in a lot of pain)”, said my younger brother. “Alright,” said the doctor, “but it is necessary that you all are there so you can know what is wrong with him.” “Alright, sir,” we all said.
When we arrived at our house, the doctor came, and he asked my grandfather, “Does something hurt (is something wrong), sir.” “Yes, it does,” said my grandfather. The doctor examined him carefully, he found what was wrong with my grandfather, and then he left him medicine, which is rora (ruda) and a sik’ (puro). My grandfather was massaged with that and slowly the pain stopped. He was cured. He was happy and said, “There is still sometime with my kids (lit. there are a few days left among my children).” We al got really happy, and then we went to sleep.

Translate the following sentences to K’iche’:

Tranlsate the following sentences to English: