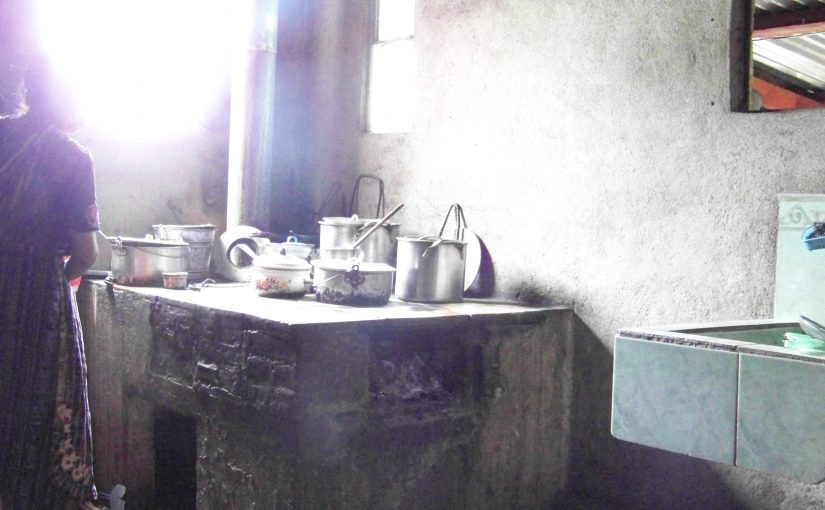 Relational nouns play the same syntactic role as English prepositions but are inflected as nouns. Unlike the locative prepositions chi and pa, relational nouns never occur without a possessive marker. They mark a relationship of belonging, causality, reflexivity, temporality or spatiality between two phrases.

In Unit 10, we read a text written by Mauricio, a beginner student from the United States who told us about what he did everyday. Mauricio later went to Nahualá to study k’iche’, and he wrote the following text. Read it, and then look at the explanation of relational nouns. Some of them, we have already been using for quite some time. After reading through the kemchi’ section, come back to the text and identify them

I want to learn K’iche, because of that I came here. Everyday, I have K’iche’ class at school. It is a little tiring because I walk to school. But I like it because I don’t walk alone. I walk with my classmates. At school, books are read and things are written by the teacher. We students also read and write there. Learning K’iche’ is a lot of work, but I am learning a lot of things, too!

It indicates a relationship of possession, association or purpose. The possessor may be emphasized with a Set B (absolutive pronoun) the relational noun. It may also be contracted as can be seen in the examples below.

Le tz’ib’ab’al wech in.
The pencil is mine.
Ronojel le ulew ech alaq.
All this land is yours (formal pl)

“Association”- The possessor is generally non-agentive and does not “own” the object but expresses a close association between them .

Kub’an le wa rech le nuk’ulanem.
S/he is making the food for my wedding.

Constructions in which –ech expresses the recipient/indirect object:


Xloq’ ulew iwech ix.
The land was bought for you all.
Maltyox chiwe.
Thank you all.
Jas kub’ij chwe?
What is he saying to me?
Kuya le wuj chqe.
He is giving the book to us.

In combination with rumal after  intransitive verbs and passive forms, it introduces indirect causes:

Xopan le wuj awuk’ rumal wech in.
The book came because of me.

Following a nominal, -ech indicates a quality or state of the corresponding person:


Utz awe la!
Lucky you! You have it good! (formal)

Sidenote: The shortened from e is used as the word for girlfriend/boyfriend


La k’o awe?
Do you have a boyfriend?

B) –UK’
It is equivalent to English with but can also be a locative (See bottom two examples below).


Kinch’aw ruk’ le nunan pa le ch’aweb’al.
I am speaking with my mom on the phone
Ri ala awuk’ xb’e wi.
The boy went (together) with you
Kimb’e ruk’ le ajkun.
I am going to the doctor
Kel b’i ruk’ le ajkun.
He leaves from the doctor.

C)–UMAL
The noun –umal introduces agents in passive constructions: by, by agency of … , because of…


Xkamisax le me’s rumal le tz’i’.
The cat was killed by the dog.

D) –ONOJEL
This noun is a quantifier meaning all (pl) or every (sg).

E) -TUKEL
-tukel means by oneself; alone .The referent  appears as the possessive marker.

F) -ij
The relational noun -ij introduces verbal goals. It is comparable to English “after” in “He threw himself after her.”

We will learn about a few other relational nouns in later units.

Translate the following phrases into K’iche’:

Translate the following phrases into English: